The renovation involved part of a house in a medieval stone and brickwork building located in a small village near Pordenone.

While the house, which had been empty for years, is very interesting from an architectural point of view, it proved to be far more challenging than expected to restore.

Architect Rosanna Bignucolo had to fully demolish the mezzanine and slab, both of which beyond repair, and rebuild the first and second floor around the only central load-bearing wall.

The ceiling was completely demolished too and replaced with large windows, a winning solution to achieve natural lighting throughout the whole house, from the top floor down to the ground floor.

Upon entering the premises, visitors receive an original welcome in a sort of garage, where the owner proudly displays his vintage motorbikes. The same resin floor in the garage leads up to the dining area which, separated by a sliding glass door, prominently features a magnificent table made to design by reclaiming the old solid oak door of the main entrance. On the left, the white satin-finished kitchen with Corian worktop stretches in length.

The wall has been left with the original stones exposed, though the renovation works also revealed the arches of old windows, recesses, beams, which have been patiently reclaimed and left in view.

The centrepiece on the ground floor is the double-sided fireplace, something the owner strongly wanted and obtained by using the old flue in the load-bearing wall. The view of the hearth on both sides effectively separates the living area from the dining room.

The bold decision to paint the entire cladding black, up to the ceiling, assured a dramatic effect. The metallic, almost bronze paint, which feels uneven to the touch, was also applied on the vents, originally in white painted metal.

The fireplace is lit up almost every day in winter, autumn and spring and provides the only source of heating for the whole house, as the warmth it produces easily reaches the upper floors.

The black paint highlights the only load-bearing wall resulting from the renovation and emphasises its purpose..
– Rosanna Bignucolo, architect 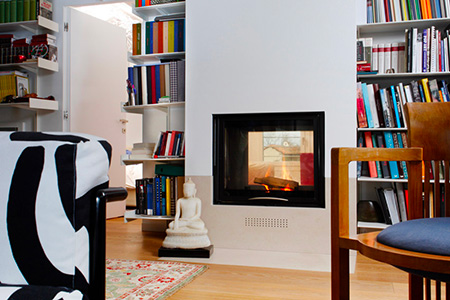 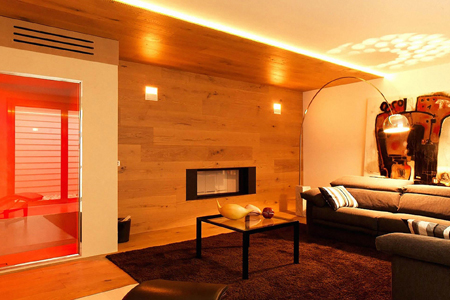 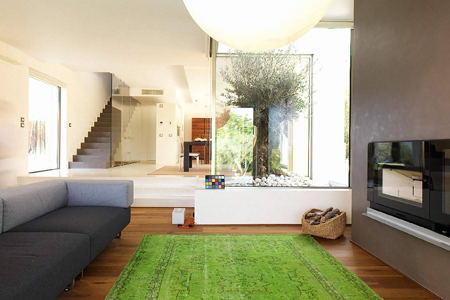