The attic of a traditional country house, a simple masonry building surrounded by fields and farms, has been converted to host the Representa graphic design and communication studio.

The two studio partners personally oversaw the renovation, taking care of all the necessary works, such as laying the natural oak parquet flooring and refurbishing the walls, which were painted white, leaving the original brickwork exposed.

The resulting 100-square meter space is mainly developed vertically, reaching 4.5 meters at the highest point. The oak beams of the original ceiling were restored and treated with wax.

Since there was no pre-existing heating system, the two partners opted for a more ecological and aesthetically pleasing alternative for heating the open space.

They both found pellet heating to be the ideal solution, since it combines the beauty of a natural flame with the benefits of a convenient and efficient heating system.

The two stoves were installed on opposite sides of the studio, one next to the meeting table and the other in the area where the two employees work.

BAGS OF PELLET
A DAY
FOR EACH STOVE

None of the stoves we had seen suited the style we were after. Then, as soon as we saw the Cute stove we knew it was the right fit. Its flame creates a homey feel, so customers relax and make it more enjoyable to develop projects together.

The studio is a single open space, with high ceilings and separated only by a central storage space.

The furniture and finishes are characterised by industrial style elements, such as the glossy red lacquered metal doors and the institutional colour of the studio, which contrast with the total white of the walls, furnishings and desks.

With their curved lines, the two stoves make the entire room feel warmer and snugger, even when they are switched off.

When switched on, the fireboxes of the two stoves spread a warm, enveloping light, allowing the temperature to be maintained at about 23°C throughout the studio.

A programming option is a must-have in a work environment. The two stoves are programmed to switch on automatically around six o’clock in the morning. In this way, the studio is already warm and cosy when the graphic designers arrive between 8.30 and 9:00am.

Ventilation is kept at level 1 or 2, so that the heat is distributed quickly and evenly. Thanks to the excellent insulation, the stoves are also capable of effectively heating in “No-Air” mode, i.e. with ventilation turned off and transferring heat simply through natural convection.

Every two days, in the evening, the brazier has to be cleaned out with a vacuum cleaner, but this takes a quarter of an hour at the most. The pellet hopper, on the other hand, has to be filled every day by adding a bag for each stove taken from the storage area created in the centre of the room.

In addition to having a minimalist design, the Cute stove is characterised by a wider and more natural flame than other pellet stoves available on the market.

The flame of this stove, which is placed right next to the desks, has a calming effect that stimulates concentration and boosts creativity. 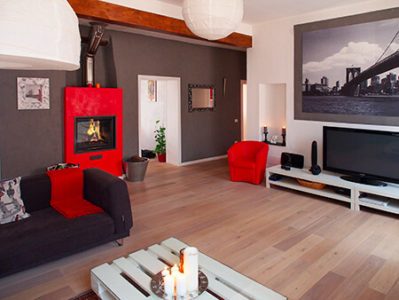 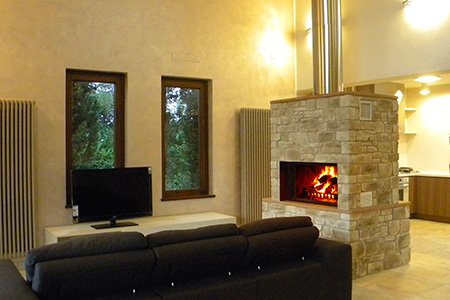