The building is a large manor house dating back to the early 19th century, at an altitude of about 800 metres, just above Lake Como. It consists of three habitable floors, for a total of 450 square metres.

The owner personally took care of the renovation of the building with the aim of preserving its structure, redeveloping it as a residence and office for her styling and set design studio (Monti Studio).

The interiors and choice of furnishings stand out for their elegant and sophisticated style, achieved by combining vintage pieces with 1950s designer items.

On the ground floor, there is a kitchen, dinette, living room and dining room. The studio and sleeping area are on the first floor. The top floor, which is less used, is intended for guests.

The building is heated by a natural gas boiler that feeds the traditional ceramic radiators. Given the less than optimal insulation of the building, the boiler alone is not enough to ensure an adequate temperature in all the rooms.

An additional heat source became necessary, especially in the areas of the house that are used the most. Namely, the radiators in the studio barely managed to heat the room up to 16°C, which is certainly not an adequate temperature when one has to spend many hours sitting down.

The small pellet stove was installed in a niche, which before accommodated an old cement firebox.
This task proved to be extremely simple, since the smoke outlet placed on top of the stove allowed an easy and quick connection with the existing flue.

SACKS OF PELLETS
PER DAY

Cute has a functional, pure and technical appearance, reminiscent of mechanical objects of the Seventies. I like it for its simplicity, because it has nothing affected about it and does not aspire to be something else.

The studio consists of two environments, a larger space where the collaborators work and the owner’s private office. By leaving the door open, the hot air produced by the stove heats both rooms effectively, for a total of about 50 square metres.

The stove is kept on all day, from 8am until late in the evening. The ventilation is kept at level 1 or 2, so that the hot air can also reach the owner’s private office. Once the desired temperature has been reached, around 22°C, the owner prefers to shut down the ventilation entirely. The stove continues to heat effectively by radiation and natural convection, ensuring very quiet operation.

In addition to its minimalist design, the owner also appreciates the natural flame of this stove. Thanks to its elongated brazier, the pellets settle evenly, creating a large and appealing flame, which resembles that of a wood fire. 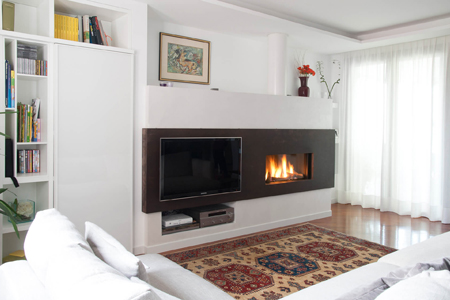 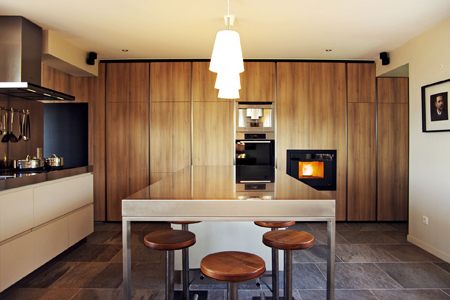