Home » Projects » Fireplace and TV in a single cor-ten cladding

Studio 3 A, based in Pordenone, was entrusted with the renovation of a private residence dating back to the 1960s. The rather anonymous living area was the focus for the renovation works, which would see the spaces being re-designed and the furnishings re-considered. The presence of a fireplace, in addition to being greatly desired by the customers, would have been an excellent starting point around which to organise the new arrangement in the living area.

There were however, two limitations to consider. The first was of a structural nature, owing to the presence of a single wall within which both the eventual fireplace and the television would be fitted. The second related more to the customers’ lifestyle and a genuine lack of space to store wood or pellets.

The customer liked the idea of a fireplace, but not the mandatory routine concerning the cleaning of the ash and loading of the fuel. A gas fireplace therefore, represented the perfect solution in terms of both ease of use and practicality.

The chosen model, a closed firebox gas fireplace, was installed and then connected to the methane system already present in the home. The interior houses false logs made from flame-resistant material, which conceal the nozzles required to ignite the flame.

Simply press a button on the remote control to create a realistic fire effect that can also be programmed to switch on and off at set times.

In addition to its extreme ease of use, the fireplace also guarantees a rather efficient heating function. Operating exclusively via natural convection, the fireplace is able to sufficiently heat the entire living space, which measures a total of 60 square metres. By leaving the door open, in addition to the living area, the kitchen is also heated.

The fireplace has been incorporated into a cor-ten steel cladding, an interesting material in terms of both its heat refraction properties and original burnished colouration. The same material was also used for the console in the entrance hall.

During the cladding design phase, special attention was paid to the use of appropriate insulation, so as to incorporate the plasma television together with the fireplace.

The cor-ten parallelpipedon is inserted into the plasterboard, which has been painted and powder-coated white with a slight protrusion to allow for the realisation of the immaculately concealed ventilation grilles.

The flue was left exposed, but painted white to better complement the general ambient. 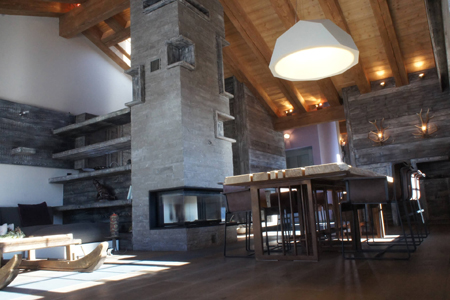 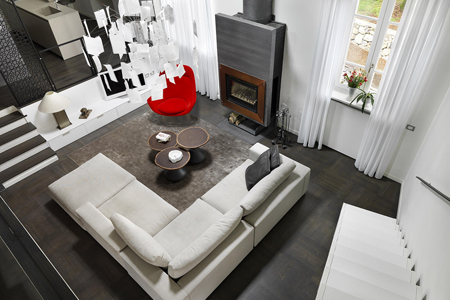